Someone on the social medium Instagram posted a picture of the Inside Front 7 inch made by Good Life Recordings. This record has the four main H8000 bands that were on Good Life back in 1996. It concerns Liar, Congress, Regression and Shortsight.
Seeing that post from @xtokeex made me look in the archives and dig up some stuff that I hadn’t mentioned here before. Like in the good old days of this blog.

I remember buying this zine with the record from the person that ran Surrounded Record from Italy. The same person that played in Purification. I do not remember the year but it was after 2006 somewhere. So this guy kept it away from being trashed. I think many good zines ended up that way after cleaning the bedroom when people grow up and leave their parents house. Such a damn shame! Because there were many many zine made back then and some were really good.

Looking at the back of the zine, we see that many people wrote and cooperated in the realization the Inside Front magazines. Apart from those mentioned, the “Inside Front Workers Collective”, there were also various new reporters and editorial writers. So the zine was pretty organized and not a one man effort. 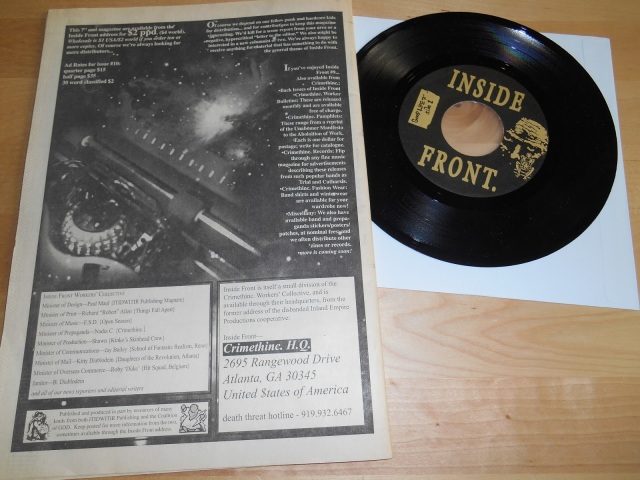 So also Good Life cooperated with the zine, by pressing a 7 inch. There is mentioning in the zine of the 7 inch that was themed with Inside Front #9 but also there was mentioning on the 7 inch of Inside Front. Only the date from the 7 inch differs from that of the zine. So this wasn’t exclusively pressed to belong together. I don’t know the full details, so if anyone knows, please comment.

The back side of the 7 inch is hilarious. It has Good Life ironically explaining why they are able to press this. Probably annoyed by the many curious and jealous people. It’s tongue in cheek but pretty much over the top and also full of sarcasm.

Furthermore, inside the zine you can find worldwide scene reports. Going from Boston, Brooklyn, Troy and Wisconsin in the USA, to Belgium, Czech, Germany and Italy in Europe. There is also a quality interview with Congress and Timebomb. There are the how to’s of booking, packing, transportation, housing, etc. for bands on tour (learning to help them spread the word by touring). And some other universal, Hardcore transcending themes such as conditions in India. Some columns, all philosophically on a good level. And an extensive record review part!

Too bad there aren’t many of these left anymore, glad to have one!