TRENCHFOOT Turn On, Tune In, Drop Out

Some will differ the fact that i classify this as H8000 but all will be revealed.
TRENCHFOOT had risen from the ashes from former H8000 band KINGPIN when 2 members of KINGPIN left in 2004. The eagerly continued to play only under a new name TRENCHFOOT. Also the muscial style had progressed over time with the adding of Tim on drums. Soon they played the music that once set their hearts on fire. 80’s Bay area thrash and crossover as released upon this world by bands such as EXODUS, SUICIDAL TENDENCIES, SLAYER and other mortal gods of metal.
They first started off with Stef from BLOODSHOT on the mike but soon their ways parted. Only weeks before recording they finally got their final frontman to release this album with. Tom from former FAMILY OF DOG took the microphone in his hand and completed the ranks of H8000’s crossover band TRENCHFOOT.
With members who played in different H8000 projects such as KINGPIN, CONGRESS, LIAR, RISE AND FALL, MINDSTAB, CLOON and FAMILY OF DOG, these guys already knew their way in the scene so total stage domination was no problem here.
Their album Turn On, Tune In, Drop Out was released in 2008 by Belgium label Reality Records on a edition of 500 black vinyl 12’s. A daring risk form this label and somewhat odd that i recently bought this album for just 5 euro from their distro at a show. To complete their thrash influence even the artwork is in full on 80’s thrash style featuring zombies and nuclear holocaust, reminiscing to the artwork as seen on MUNICIPAL WASTE covers and other thrashmonsters. The influence of Pushead and others oozes toxic slime from this plaque of vinyl.
Even the insert is straight up DIY thrash approach, one side filled with the lyrics, no bells and whistles here. The other side depicting a drawing and their statement of origin and style. H8000 Crossover Thrash, the title says it all, so no surprises here. With headquarters in Wervik this band is rooted deeply into the H8000 area and even Josh from CONGRESS had a guest appearance on this album.
And now the lionpart of this album, the music. Like they proclaimed all over it’s pure thrashmetal with a touch of their own. Crossover between those mighty 80’s thrashkings and some more deep provocative thoughts through the lyrics.
With songs touching topics as religion, ecology and even a sort of love song they touch another ground with the H8000 mentality and add their own flavour to the thrash experience. There’s even a song that sums up many of the bands that influenced this band ranging from THE DOORS to BAD BRAINS and back to WEEN and many more. Chugging riffs lead you through the zombie apocalypse of TRENCHFOOT. 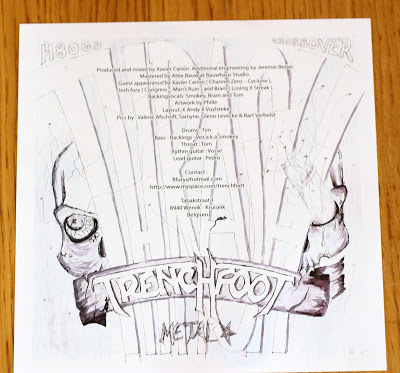 H8000 Crossover Thrash TRENCHFOOT
With the recent departure of Jeff Hanneman from SLAYER thrash seems to be a hot topic again but these guys already proved the value of thrash metal and it’s influence on hardcore years ago.
My reason for discussing this album is just that this seems to be an album and band that never got the attention they deserved. They started after the haydays of H8000 hardcore and always tended to be a sort of outcast amidst the metal hardcore of that scene. Was this by choice or just coincidence. Who will tell.
I still believe in the strength of this band and also with the reunion of vocalist Tom’s band FAMILY OF DOG i’d like to make a call to all to got check them out.
FAMILY OF DOG was one of the most original bands Belgium has seen in years and they just happen to be playing next weekend 18th May @ Maldegem during a show titled Grof Grief with other local HC heroes such as BLIND TO FAITH, CHEAP DRUGS,… Go check them out, broaden your perspective.
Turn on, tune in and drop out.
Ezekiel02:24:81
https://youtube.googleapis.com/v/_Io5lUwGPI0&source=uds

Mainstrike from the Netherlands was one of Europe’s Straight-Edge Hardcore powerhouses from the mid to late nineties. They played at times groovy and at times fast paced Youth-crew Hardcore. And […]
Mainstrike No Passing Phase
hardcore/metal vinyl