Records can be valuable because of several reasons. First reason is emotional attachment to a record because you like the music, cover, band, etc. Or because the owner was involved in making the record by being in the band, the label. Another reason is that the value of the record consists out of historical relevance. Yet another reason might be because the record is limited and highly sought after and so pumping up the price.

Well, I got the following records for all above reasons. I like music and I think it’s of historical relevance. Hardcore might (still) mainly be about pioneering and this band might not have initiated a certain sound of music but they did bring the American Hardcore sound to European soil back in 1989.

I also believe it’s a bit stupid to limit collecting Hardcore to a certain region because it’s in Hardcore’s nature to operate international and boundaries are vanishing more and more.

Oh yeah, need to say that these guys such as the peeps in Rise Above were also dedicated to Straight-Edge and more or less in the same time-era! Another reason to get into it.

I now have two versions of the “Integrity” 7″ by the band PROFOUND the oldest and the most limited versions. Let’s start with the oldest version which is recognizable by the Red ink dustsleeve stamp, telling us that this record is dedicated to Seein’ Red. Although this doesn’t confirm this as a first pressing, what does confirm this as one is the name of the label that released this. We all know the German label Crucial Response Records, well before operating under that name it was called ANTI-SCHELSKI RECORDS:

And this is the proof of it being a first press. More pictures: 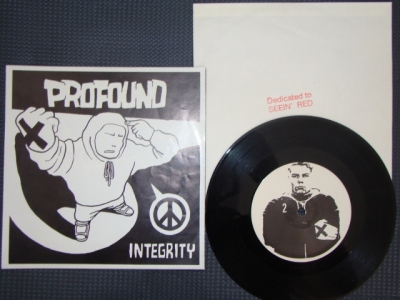 The second version I got is a newer version but very limited; 70 copies with a silkscreened sleeve and a separate lyric insert:

There are also two colored variations, namely Yellow and Red vinyl. If you care about European Hardcore you should definitely start collecting this one. Here’s a more detailed pressing info by the label.