Another 7″ for the collection. Seems like lately all i’ve been purchasing and reviewing are 7″s. This time it’s a classic reissue of the split EP by COLD WORLD and WAR HUNGRY. Orginally released in 2006 on SIX FEET UNDER RECORDS and reissued last year. Being one of SFU’s first releases and since the original release was already long sold out, they gave it another run.

This reissue is merely a remastered version of the previous release with new artwork,
fold out coverart depicting both bands by the means of some mean portraits. Additional bonus is that
COLD WORLD added an extra track to their side to balance the numbers on both sides. 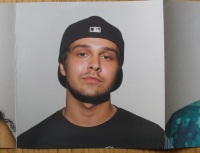 The COLD WORLD side features “Gods And Earths” and freshly new cut track “A-Alikes”. Both featuring nicely executed hardcore with a dash of Hip Hop flavor by these Pennsylvanians. They even give a nudge to the Wu Tang Clan between two songs assisted by a beat and some girl scandalizing ‘Cold World Mothafucka!!! ‘.

The B side is for Wilkes-Barre best export product, WAR HUNGRY, Penn State all the way on this split 7″. This time a more a layer of stoner is laid across the hardcore grooves. “The Hand That Feeds” and “Final Hour” are more of the kind of music i prefer on this split 7″, so i’m guessing this will get more coverage than the COLD WORLD side. Dirty chugging guitars do it for me, especially if they sound as fat as on Final Hour, the whole Pirates of the Caribbean djingle in the middle of the song is even a bit offbeat to me.

So another fine reissue of the mighty Pennsylvanian bands. This one comes on white vinyl as shown below
and also avalaible in black vinyl.

Centerlabels are still the same as in the original 2006 release, only this time in full color.
This split 7″ is up to his fourth pressing now and still remains great.

Good luck finding all those versions.