What can be seen in one single record…

No longer gatefold it seems for the repress of the SECRETS OF THE WORLD Lp from TRAPPED UNDER ICE. This is the 3rd pressing and it’s looks quite beautiful according to my aesthetics. Also the color of the lettering changes from Red to Green. And the lyrics now logically have to come on a sheet instead of being printed on inside of the sleeve. Anyway look at these pictures and judge for yourself:

What’s also remarkable is that there are two kinds of splatter on one piece of vinyl. Namely “spot-splatter” and “line-splatter”. The B-side spot-splatter can be seen on the above picture and A-side line splatter in the first picture!

While I’m writing of the REAPER collection, I also traded with Wade from don’t collect records because I missed out on the pre-order from TURNSTILE. Nothing much more to say than that this version looks cheaper that the regular version but I needed it for my completion tendencies. Anyway here’s how it looks: 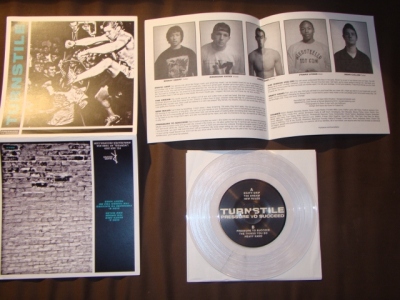