An Introduction to DAG NASTY

I really don’t know that much about Dag Nasty although I have 3 full lengths of the band in my possession. Is that enough to conclude that I actually know something worthy about the band. I guess it does. Maybe I should read more of Double Cross content because that’s the only free source I got. Anyway, Dag Nasty is a band that speaks to me! And would like to introduce them to those who never heard about them or haven’t taken the time to check them out in this post.

Thanks to the label that released their first record (Dischord Records) there is now finally a legal and beautifully made LP on the market that has the first recordings for “CAN I SAY” with another vocalist than Dave Smalley, namely Shawn Brown. Therefore the release is called “Dag With Shawn”.

Anyway if you never heard about this, read the following explanation on the backside of the jacket:

Right now there’s a poll on Double Cross on which I voted -like the majority- on Dave Smalley as favorite vocalist for the band. This record is with Dave Smalley: 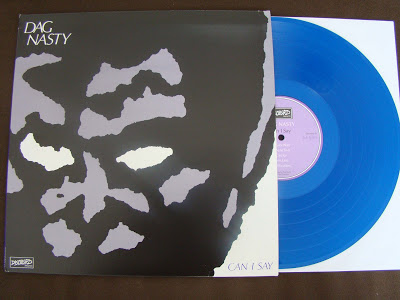 Another record is “Wig Out At Denko’s”, it has Peter Cortner on vocals:

As that isn’t enough being on Dischord Records, they also released a record on Revelation Records and it’s a real good one I think. It is the result of a reunion with Dave Smalley in 2002: