The new KICKBACK ‘NO SURRENDER’ release has been filling my expectations completely and was the unknown thing I was looking for. I mean I buy and buy lots of stuff but not everything satisfies me, it’s just approaching my needs to a certain degree. But when I heard this CD for the first time I realized that this was what I wanted. Because KICKBACK has done what needed to be done. And the adaption of a guitarist with a black / death metal background was the next logical step.

It is hard enough to be called hardcore, but it isn’t hardcore that walks in line, no, this is pushing the boundaries of hardcore. Taking it to the next level, without doing it damage, on the contrary. 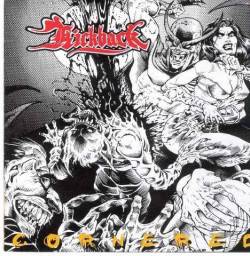 I know KICKBACK from the time that ‘Cornered’ came out and liked it a lot, only one of my friends also liked KICKBACK, but the majority didn’t knew it. And when I let them hear this CD they didn’t find it agreeable. They got a feeling of discomfort and blackness. When I read the comments on AsIce about this release it is still the same thing that occurs, they find it scary or creepy. But not me, Ican take this portion of negativity. I guess this is because I can absorb a lot of evil and filth. With me it is catalyzed into something positive. KICKBACK can’t harm me because I don’t go along with the dark message they spread, I just keep it off.

The new trademark for KICKBACK introduced on asice – want to see some violence, go see a kickback show – is actually a late pass. In the late 90’s I went to see a KICKBACK show in Bissegem (somewhere in the neighborhood of K-Town) and there was then already violence at the show. That violence actually came from one person who was punching all the kids that stood in a circle around the pit. I was out to mosh to but I stepped back from that urge because the violence I witnessed wasn’t something I agreed with. It wasn’t friendly violence but this was actually (unconsciously) meant to hurt. Due to this show being in the H8000 area all the kids were shocked. Stephen of KICKBACK didn’t say at thing about it and the result was that they just played their set and went home.

Oh well, somehow I feel connected with Stephen in his lyrics but realize that this is a dark side of my personality. Especially when I lost my girlfriend and some of my best friends, the lyrics from CORNERED were more than adjust. Somehow all of them fitted my emotions then.

They are about the consequences of feeling or being betrayed and reacting on this things in an incorrect way. After losing some things precious in your life you feel alone and left behind, the first feelings you get are aggression towards the people that left you behind. This aggression you feel is suppressed by your education and the love you still have for those people. This suppressed anger makes you go insane. You don’t know what to do with it and it starts working in your unconsciousness. You get slightly paranoid and afraid of the own violence you consider. You get torn two and you have the feeling that you have to choose between some things but actually you just have to absorb the violent actions you created in your mind. You have indeed the feeling of being cornered by those betrayers. But that’s only caused by your own wrong initial reaction.

If only I could break through this wall
This wall that surrouds me
I know I will be free
All alone in my hell… Where are you ?
Try to tempt me
I think I’m going insane
So many fuckin’ path
Lead to hell

Cornered
Temperature’s rising
Demon awaken
No one is spared…

and when all the things you believe in
fall through…what are you gonna do?

This inside struggle is described in many lyric’s from the CORNERED album, all of them actually. I’m saying all this because the things described there are still present in Stephens life. And I believe that the new album is the consequence of all that struggling and inept way of handling with those feelings and thoughts.

As GSR says; NO SURRENDER takes off were FOREVER WAR ended indeed. Namely the consequences of this impossible to do struggle. And the vicious circle that flows out of it. I’m saying that you can’t understand NO SURRENDER without knowing CORNERED.

It is kind of sick in a way though. I mean mental healthcare institutions would certainly try to extinguish or correct such a way of thinking and behaving.

The image of murder and death KICKBACK creates is something I don’t understand though. Any thoughts on this? I think it is just a misplaced image they created.