I have here the reviews of two interviews in H8Z #5, the first is with Hans LIAR and the second is with the band FAMILY OF DOG. The interview with Hans LIAR in H8Z is very in depth, he reveals his true self and also for what LIAR stands for. LIAR was and still is a hard statement against the current, both musically and lyrically. The interview with LIAR was taken by Tom FOD in the period between “Falls Of Torment” and their second full-length “Invictus”. Altough Goodlife Recordings did their debut full length, Invictus is on another label, namely Genet Records. After Invictus came out LIAR went back to Goodlife to record their third Full Length “Deathrow Earth”. The change of label isn’t such a big deal, there was never trouble between Liar and Edward (Good Life), although some thought there was. Bruno Genet is like Edward GL a good friend of the band. So tells us the interview.
Family Of Dog is less to the point than Hans LIAR in these interviews. But then LIAR is more serious about the world problems than FOD. Both do a totally different approach so you can’t actually compare these two.
Also in this post you will find pictures of the “Falls Of Torment” LP from LIAR (this is their debut LP on Good Life Recordings !!) and the CD of Family Of Dog (there doesn’t exist a vinyl version of this one). Just in case you want to know/see what to/you search after…
LIAR interview
Hans Liar tells us that Liar isn’t the first Edge-metal-sound band; Wheel Of Progress already installed the metal sound and aggression into the hardcore sound of the H8000 area. About this Hans clearly stated that to step back from the traditional hardcore sound was the intention. They wanted to do something more extreme and different.
Only minor differences exist between the old days and the day the interview was taken. Hans then observed more seriousness and commitment while now he observes more people who think HC is about wearing the right clothing and listening to the right bands. He swears on this fact but doesn’t hate it. As a reaction he just tells us what he stands for; hardcore as a lifestyle and a commitment to this with whole heart and mind. And fighting for these believes and feelings.
While reading this interview think the aggressive and angry sound of LIAR is a reaction to the hectic nineties. In times where kids intoxicate their selves, were people abuse animals, create ecological problems LIAR is a counteraction of not only an aggressive sound but also a lifestyle with no drugs, a sober mind and a clear outlook on life.
Liars clear outlook on life is proven by their views upon politics. They are interested in politics but then more on the scale of the scene and the judges that are present in it. They claim that they are more political than most emo-flower-power bands who spread who spread the message of flowers and peace. According to LIAR this is just a dream; there are poisons that destroy humanity, religious groups that try to overpower, a natural circle that is broken and a will to gain dominion over every living creature. This left wing philosophy sprouts on the fact that LIAR face reality as it is. LIAR is your wake-up call.
Later in this interview Hans gives his opinion about homosexuality, cannabis, Edgemetal bands, fascists and MTV. I find that the points are very well-taken.
Although this sober, objective and critical view of Hans in the lyrics of “Falls Of Torment” he explains that the newer lyrics are more personal and sensitive. They deal with loss of a loved one in life, grief, respect and loyalty to those who deserve it.
With this said, he tells us that the H8000 scene saved him from daily evils, gave him strength, hope and inspiration. But he also tells us that competition sometimes kills friendships and scenes worldwide. This downfall is his biggest fear.
“STRAIGHT EDGE IS THE DOPE ! ! !”

FAMILY OF DOG interview
The band Family of Dog is not from the H8000 area. They are actually from Ghent in East-Flanders. You can best describe their music as metal fueled hardcore. Although they are often labeled as a deathcore band, their influences are Bad Brains, Prong, Suicidal Tendencies and Victims. So they say that they are more a punk band than a metal band. The name is taken from a classic Morbid Angel song ‘Chapel Of Ghouls’ and dog is God spelled Backwards.
As a response to the increasing amount of fights on the local HC-gigs, they say that it isn’t the purpose of the bands to turn the scene in a ‘New York Macho Circus’. Very true, there are a lot of clans, crews and posses in NY. Even the legendary NYHC band, Sick Of It All wouldn’t play New York because of the gangs and the violence. And at a 25 Ta Life show a kid got stabbed with a knife. “There is a difference between dancing and ultimate fighting“, they say.
Furthermore they also explain their outspoken opinion against Christianity and Catholicism. They say that they aren’t obsessive Satan lovers, despite the 666 number on their T-shirts. They only put it on their merch because Satanism originated from the pagan rituals that Christianity tried to erase 2000 years ago, and it survived as a countermovement through constructive values like creative power, individual development, respect for the forces of nature and most important, individual moral judgment.
For closers I will quote here there opinion about metal and hardcore: “Metal bands like Slayer, Cannibal Corpse and Morbid Angel aim at the unconscious reptile part of the brain. While HC bands use the same musical techniques to fuel their message.” Haha, very witty and funny.

Also with this zine comes an exclusive split 7″ from the two interviewed bands. Be sure to get it because these are raw, rare and ultra moshy songs. This split 7″ is on two labels who cooperate for this one. Liar appears from Genet Records and Family Of Dog appears from Frostbite Records. Liar brings militant and obscure Straight Edge lyrics, while FOD brings enormously moshy tunes, releasing the beast inside of them. 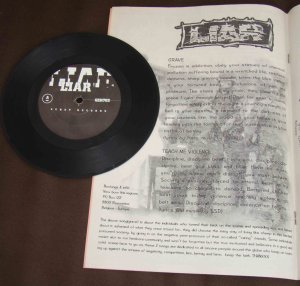 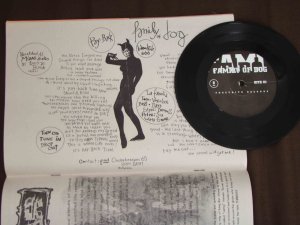 My Store On Discogs

Deformity never had an album released on vinyl before. Blasphemour Records from the United States changed that a few years ago. As in fine American tradition there are test pressings made for the release. And as in fine H8000 tradition, there are transition colour copies of the release also. This post features the two.
Deformity Test Press

Colours of the Shorebreak LP